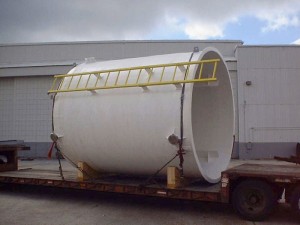 The earliest work in improving abrasion resistance of FRP pipe was by Jack Mallinson of FMC’s plant in Front Royal, Virginia, working in conjunction with Beetle Plastics LLC. These original developments took place in the late 1960’s and early 1970’s.

It was found that significant increases in abrasion resistance could be achieved by adding armoring modifiers to the resin used for the internal corrosion barrier of the pipe. In those early days, the best modifiers were various forms and grades of aluminum oxides. There were problems in getting the aluminum oxide to disperse and “wet out”. However, once the dispersions were obtained, improvements of abrasion life in the magnitude of two to three times over a non-modified resin were achieved. The resin matrix used in those days was typically the Hetron 197 polyester resin.

Some companies that make so-called abrasion resistant pipe still use that same filler approach and formulation from the late 1960’s. But in the early 1970’s, working with the late Walt Szymanski of Hooker Chemical, we made major advancements in the technology of abrasion resistance in FRP composites.

In an extensive series of tests conducted in conjunction with Hooker, it was discovered that three separate fabrication techniques had significant influence on the resulting abrasion resistance of the composite laminate.

The type of resin used in making the inner abrasion/corrosion liner of the fiberglass pipe influences the resulting abrasion resistance of the pipe. Significant increases in the abrasion service life were obtained by using special developmental elastomeric and acrylic modified epoxy resins. The management of Beetle Plastics worked closely with Dow Chemical and Interplastics in developing these experimental resins. The selection of the proper resin, along with specific resin modifications, was found to increase abrasion resistance by a factor of two to three times over a standard polyester or epoxy resin.

Building on the early work done with FMC, extensive research and testing was conducted for improved armoring modifiers. We were successful in developing a new type of armoring modifier that provided superior armoring of the FRP composite. This material is related in toughness to basalt, which in its natural form is often used as abrasion liners for steel pipe. Over the years, Beetle Plastics has fine-tuned the specific grades of this armoring modifier material, selecting those that demonstrated the best performance in abrasion resistant FRP composite pipe.

We also developed techniques to gain the optimum dispersion and wetting out of this armoring modifier within the resin. Getting this ideal resin “hook” to the armoring modifier is also an important consideration when developing the best possible abrasion resistance of FRP laminates.

abrasion resistant pipe, fiberglass pipeThus, to gain maximum abrasion resistance from FRP composite pipe and laminates, it takes careful selection of all three of the above factors (resin, reinforcements, and armoring modifiers), in the proper ratios and interactions. We have seen in test work reductions in abrasion loss in FRP composite laminates to just 1/10 that of non-modified laminates. In other words, one might expect increased service life of ten times, or more, from a Beetle Plastics abrasion resistant composite.

But, to paraphrase an old saying, “the proof is in the pudding.” And, thus, for FRP composite abrasion resistant pipe, the proof is in the service life obtained in actual field installations. In those applications, substantial abrasion wear and failure had occurred in just several months of service life. Regular six-month and annual inspections at these plants of our abrasion resistant pipe and elbows (anelbow is an area of high abrasive wear) showed little discernable wear. These test installations continued to be inspected on a regular basis for a number of years with no significant wear showing. Personnel changes at the plant locations have occurred, and the exact test spools and installations were “lost” as far as specific plant locations.

In the intervening years, we have continued to refine our abrasion resistant technology. As a result, we are confident that we continue to have the best FRP composite abrasion resistant piping system available. Numerous projects have been installed where the customers have achieved outstanding piping service life in highly abrasive applications. These applications have included lime slurry, fly ask slurries, and also the extremely abrasive bottom ash service.