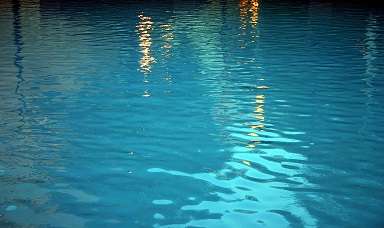 Fiberglass Reinforced Plastic (FRP) components boast design flexibility and durability.  They are used in some capacity in most odor and air pollution control applications at wastewater treatment facilities. They have demonstrated usefulness in both biological odor control systems, as well as, industrial and municipal systems that utilize chlorine dioxide.  Furthermore, their corrosion resistant properties make them an ideal material to handle noxious and corrosive gases, such as hydrogen sulfide—a common byproduct of many wastewater treatment systems.

FRP has been employed in a wide range of waste water treatment applications, for example it is used to make scrubber vessels, pipe, ductwork, fans, stacks, and chemical feed systems.  In addition to direct use as odor control devices, FRP products are often used in wastewater applications for structures, such as grating and decking, or equipment that may be exposed to odorous and potentially corrosive environments.  One of the critical differences that truly separate FRP from metals and metal alloys is that it can be formulated to be corrosion and abrasion resistant in the harshest environments—this helps FRP achieve long service life in many applications from chemical processing, pulp and paper to petrochemical, water treatment, and mining and minerals.

According to a 2006 case study, titled, “Performance Validation of Shell-Media Biological Odor Control System,” published by the Water Environment Federation, a not- for profit technical and educational originization that represents water quality professionals around the world, FRP demonstrated it can play a key role in both structure and equipment demands.

The pilot project was conducted by Orange County Utilities, Florida.  The test pilot used a shell-media based biological odor control system at the Stillwater Crossing Pump Station. The shell media has the desirable qualities of availability, low cost, long life, and high sustainability.  According to the study, the purpose of the pilot testing was to verify that the system could provide acceptable H2S and odor removal. A skid-mounted, modular pilot unit consisted of a bolted FRP paneled housing, seashell media, control panel, two FRP irrigation sumps, two water recirculation pumps, and a fan with unit-to-fan ductwork and a vertical exhaust stack.  A sampling program at the test site for duration of 8 months yielded good results in airflow and also demonstrated good odor removal efficiencies.

Many questions still exist about what role FRP will play in this industry, but they have demonstrated their worth beyond this example as superior construction materials. Similarly, FRP have demonstrated their usefulness in plants that use chlorine dioxide, a powerful oxidant used for controlling noxious, irritating, or pungent odors.   FRP have many benefits that have made them ideal materials in the wastewater treatment industry.  For example, FRP have a high strength-to-weight ratio, offer impact resistance, UV resistance, are smoke and flame retardant, possess good dimensional stability, will not take on moisture, and are electrically and thermally non-conductive. 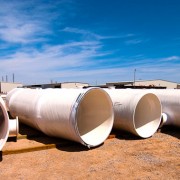 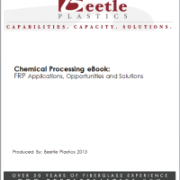 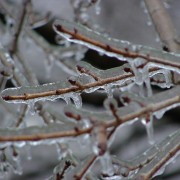 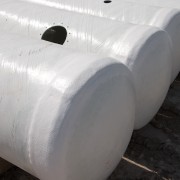 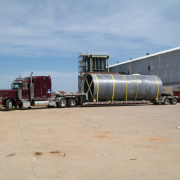 What Makes a Superior FRP Fracking Tank?
Scroll to top