Viable solutions to complex problems—that’s what we all want in the end, right? For decades civil engineers have been seeking out alternatives to traditional materials of construction such as steel alloys. FRP, a relatively new class of composite material have proven to be economical and efficient with respect to the repair of buildings and structures in a broad range of industries. Fiber Reinforced Polymer composites are defined as a polymer (plastic) matrix, either thermoset or thermoplastic, that is reinforced (combined) with a fiber or other reinforcing material with a sufficient aspect ratio (length to thickness) to provide a discernable reinforcing function in one or more directions.

The high strength-to-weight ratio, also known as the specific strength, is an important material characteristic, this number allows you to compare materials of different mass or applications where resistance against breaking has priority. Typically, when comparing strength of materials of equivalent thicknesses and sizes, FRP will weigh one seventh as much as steel and half as much as aluminum.  Civil engineers have also come to appreciate the responsiveness of FRP materials; that is FRP responds linear-elastically to axial stress and can be custom designed and fabricated to meet engineering and end-user specifications with respect to axial compression, transverse tensile stress, and shear stress—among other things.

FRP material’s portfolio of benefits is diverse and includes important benefits to end-users such as excellent corrosion and abrasion resistance as well as overall durability—where other materials succumb to stringent and environments, FRP thrives.  Corrosion resistance of FRP is a function both of resin content and the specific resin used in the laminate.  Generally speaking, the higher the resin content, the more corrosion resistant the laminate.

FRP has been successfully employed in a multitude of harsh industrial and demanding structural construction scenarios including pulp and paper, oil and gas, desalination, chemical processing, waste water purification, mining and minerals, power generation, structural bridges, defense, aerospace, and marine —the list could go on and on.  Regarding the industrial/commercial side of things, here are a few common corrosion resistant FRP applications; hydrochloric acid, acetic acid, wet chlorine gas, ferric chloride, hydrogen sulfide, sulfur dioxide fume, and sodium hypochlorite—this list is not all-inclusive. For a complete list you’ll want to connect with a resin-manufacture or check out a manufacture’s resin guide.

The short of it is this—FRP when designed properly is a cost-effective material that has demonstrated its durability and ability to withstand industrial conditions, but also, importantly long-term environmental exposure—a key distinction that has interested many civil engineers involved in the rehabilitation, retrofitting and complete rebuilding of bridges, other load bearing structures and or architectural elements, such as, pre-stressing tendons, reinforcing bars, and grid-reinforcements and structural columns.  Regardless of what type of project type or project environment you are planning for there are likely supporting case studies available that demonstrate the opportunity, solutions and benefits realized when integrating FRP into project design. 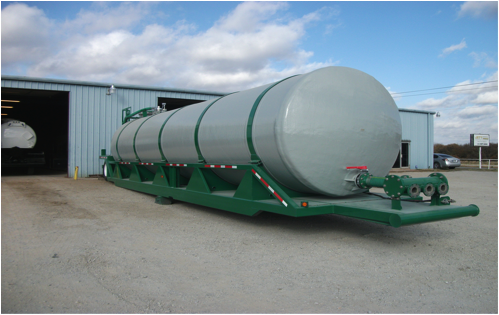 It seems like every time we look at Twitter or the news we see another story about a new way manufacturers are using FRP. The versatility of FRP is one of the many things that make it a great construction and manufacturing material. We may not make fire hydrants or underwater turbines, but we do create a lot of FRP products like fiberglass pipe, duct, tanks, and vessels.

Fiberglass pipe and ductwork can be used in virtually any application with diameters from 1/2 to 14 feet and the ability to be created with materials tailored to the specific end use.

Chemical Processing Pipe: FRP pipe is excellent for chemical processing because of its corrosion resistant properties.

Cooling Tower Pipe:Recognized as an industry standard, our cooling tower piping can be customized to meet almost any requirement.

Power Plant Pipe: FRP pipe and duct can be found in many power plant applications and processes.

Wastewater & Water Treatment Pipe: FRP waste water pipes can be used in above and below ground applications and offer a number of advantages over traditional materials like lightweight, durability, and strength.

Pulp and Paper Pipe: Ideally suited for the corrosive environments of the pulp and paper industry, FRP pipe can be found in many pulp and paper applications like sodium salts, methanol, and sulfuric acid.

Pipe Fittings: FRP fittings can be custom made to suit almost any need from bushings to reducers to everything in between.

Jack Mallinson of FMC Corporation’s plant in Front Royal, Virginia, working in conjunction with Beetle Plastics, then located in Fall River, Massachusetts, conducted some of the earliest work in improving abrasion resistance of FRP pipe. These original developments took place
in the late 1960’s and early 1970’s.

This work found that signiﬁcant increases in abrasion resistance could be achieved by adding armoring modiﬁers to the resin used for the internal corrosion barrier of the pipe. In those early days, the best modiﬁers were various forms and grades of aluminum oxides. There were problems in getting the aluminum oxide to disperse and “wet out”. However, once the aluminum oxide dispersed, improvements of abrasion life in the magnitude of two to three times over a non-modiﬁ ed resin were achieved. The resin matrix used in those days was typically the Hetron 197 polyester resin.

While some companies that make so-called abrasion resistant pipe still use that same ﬁller approach and formulation from the late 1960’s, Beetle continued to ﬁnd a better way. In the early 1970’s, working with the late Walt Szymanski of Hooker Chemical, Beetle Plastics made major advances in the technology of abrasion resistance in FRP composites. In an extensive series of tests conducted in conjunction with Hooker, Beetle discovered that three fabrication techniques signiﬁcantly inﬂuence the resulting abrasion resistance of the composite laminate.

Type of Resin: The type of resin used in making the inner abrasion/corrosion liner of the pipe inﬂuences the resulting abrasion resistance of the pipe. Special developmental elastomeric and epoxy vinyl ester resins signiﬁ cantly increase the abrasion service life. Beetle Plastics
worked closely with Dow Chemical and Interplastics in developing these experimental resins. The selection of the proper resin, along with speciﬁ c resin modiﬁ cations, increases abrasion resistance by a factor of two to three times over a standard polyester or epoxy resin.

Armoring Modiﬁer: Building on the early work done with FMC, Beetle conducted extensive tests to improve armoring modiﬁers. Beetle succeeded in developing a new type of modiﬁer that provides superior armoring of the FRP composite. This material compares in toughness to
basalt, which in its natural form is often used as abrasion liners for steel pipe.

In order to gain maximum abrasion resistance from FRP composite pipe and laminates, it takes careful selection of all three of the important factors (resin, reinforcements, and armoring modiﬁers), in the proper ratios and interactions.  Test results from this research indicate reductions in abrasion loss in FRP composite laminates to just one-tenth that of non-modiﬁed laminates. In other words, you might expect increased service life of ten times, or more, from Beetle Plastics abrasion resistant composite pipe and ducts.